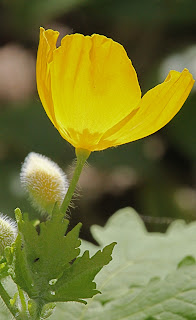 The Celandine poppy, or golden wood poppy, (Stylophorum diphyllum) put on a spectacular show this week.

Until I moved to Kalamazoo, I didn't know this eye-catching wildflower. When I first saw it, I thought it was an escaped garden flower, since I had never seen it living in western New York or in Wisconsin. Much later, I read that it isn't native to those states. (See this USDA distribution map). Even in Michigan, these plants aren't widespread, occurring mainly in the western counties. They are beautiful.
Posted by Chuck Stull at 9:47 AM