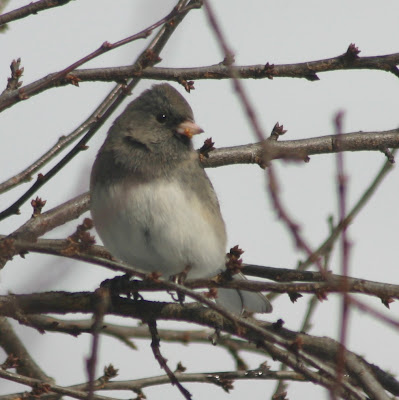 Juncos Junco hyemalis are one of the birds that migrate to Michigan for the winter. They spend summer feeding and breeding in Canada. Some juncos are found as far south as Florida and Northern Mexico. In Kalamazoo, they are a consistent winter presence.

Juncos are members of the sparrow family. There are a number of different colorations for the Dark-eyed Junco, distinct enough that they were previously classified as separate species. Our local variation is known as the Slate-colored Junco or the Northern Slate-backed Junco. Informally, they're called snowbirds.

Juncos will readily come to bird feeders but they prefer to eat from tray feeders or seeds on the ground. 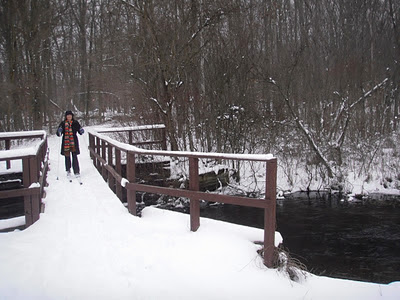 Russ Forest is one of my favorite spots for spring wildflowers but I hadn't visited it in the winter. Last weekend, before the snow melted, we skied its trails.

This park makes an ideal outing for the beginning cross-country skier. It offers a substantial outing (over 4 miles of trails) without any difficult terrain. The trails are wide, well-marked, and easy to follow. I'm not sure why loop 3 was designated "intermediate" on their maps, since it seemed perfectly level and easily negotiable. The biggest "hill" was the gentle slope to the bridge over Dowagiac Creek.

Russ Forest is less than an hour's drive from Kalamazoo. Only a few visitors had made the trip since the last snowfall, so over half of the distance we were able to ski unbroken snow. While no wildflowers are visible in January, the big tulip poplars are still there, as are the large beech trees marred by pocketknives. 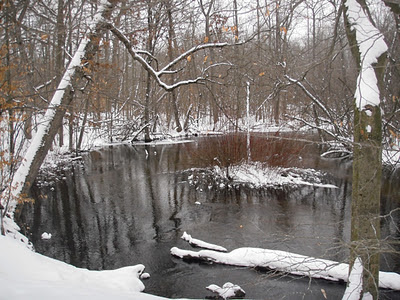 From US-131 -- Just north of Three Rivers turn west on M-216 (Marcellus highway). Proceed 18 miles, traveling through Marcellus, to the research station office located on the left side. Travel another 1/4 mile to the roadside park entrance.

From I-94 -- Take the Paw Paw M-40 exit (exit 60). Travel south on M-40 through Lawton to Marcellus Highway. Turn west and travel approximately 5 miles to the research station office on the left side. Travel another 1/4 mile to the roadside park entrance. 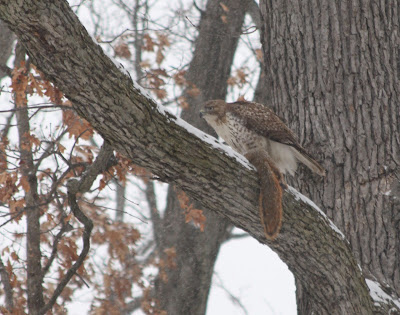 On Friday afternoon, I was chatting with a friend in his office while college life went on outside his window: students walking across the upper quad, squirrels bounding across the snow. Suddenly, a dark shape streaked past the oak trees and crashed into a squirrel. A red-tailed hawk had found its dinner. I'd never seen a hawk at Kalamazoo College so it was a real surprise. I'm sure it was a bigger surprise to the student who was standing about 10 feet away when it happened. 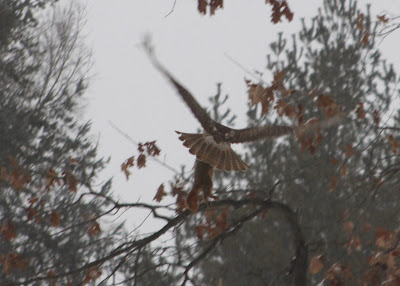 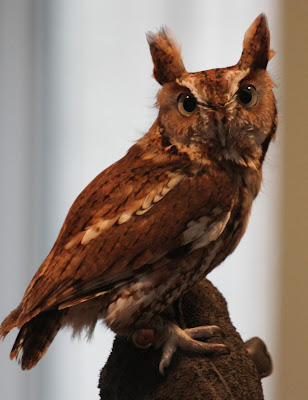 Eastern Screech Owls (Otus asio) are common in Michigan, but I'm not sure I've ever seen one in the wild. Like the other owls of Michigan, Screech Owls are nocturnal, making them more difficult to observe. I'm more likely to hear owls than see them.

Screech Owls are much smaller than Michigan's other owls. They are predators, with a diet of rodents, small birds, and large insects.

The bird pictured here is used in educational programs at the Kalamazoo Nature Center.
Posted by Chuck Stull at 2:16 PM No comments: 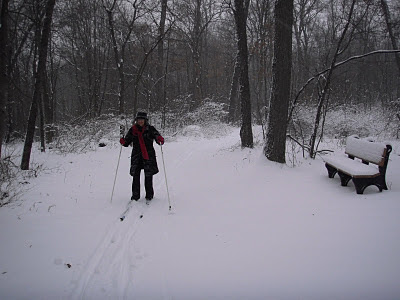 Kalamazoo's inconsistent winter means cross-country skiers need to take advantage of the snow when it does arrive. That often means fitting skiing into a work day, so it's nice to find spots for a short jaunt in town. West Lake Nature Preserve in Portage isn't a big ski destination, but it does have a nice loop path through the woods. It's a good place for beginners since it's a short trail with no hills, only a few gentle grades.

For skiers looking for a longer outing, West Lake park is just across Westnedge Avenue from Bishops Bog which connects to Schrier Park. These parks combine to form the South Central Portage Greenway and offer about 5 miles of trails.

West Lake's trails get a lot of use from non-skiers, so it's best to go shortly after a winter storm while the snow is fresh. If the snow is deep enough, you can ski the boardwalk to the preserve's bog and the overlook of West Lake.

parking is off South Shore Drive.
Posted by Chuck Stull at 7:00 AM No comments: 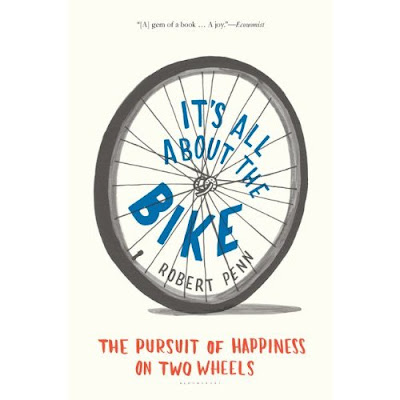 Available from Amazon, other booksellers, and libraries.
Posted by Chuck Stull at 9:30 AM No comments: In 1848, James Fenimore Cooper, the author famous for the Last of the Mohicans, published a novel set in Kalamazoo titled Oak Openings. Set in 1812, it describes west Michigan before European settlement:

The woods around were the then unpeopled forest of Michigan ; and the small winding reach of placid water that was just visible in the distance, was an elbow of the Kalamazoo, a beautiful little river that flows westward, emptying its tribute into the vast expanse of Lake Michigan. Now, this river has already become known, by its villages and farms, and railroads and mills; but then, not a dwelling of more pretension than the wigwam of the Indian, or an occasional shanty of some white adventurer, had ever been seen on its banks. In that day, the whole of that fine peninsula, with the exception of a narrow belt of country along the Detroit River, which was settled by the French as far back as near the close of the seventeenth century, was literally a wilderness. If a white man found his way into it, it was as an Indian trader, a hunter, or an adventurer-in some other of the pursuits connected with border life and the habits of the savages.

The title, Oak Openings, refers to the landscape, an ecosystem now called an Oak Savannah. Cooper describes it:

The trees, with very few exceptions, were what is called the "burr-oak," a small variety of a very extensive genus; and the spaces between them, always irregular, and often of singular beauty, have obtained the name of "openings;" the two terms combined giving their appellation to this particular species of native forest, under the name of "Oak Openings."

The story itself is about the adventures of Ben Boden, a "bee-hunter," on the Michigan frontier during the War of 1812. The prose is very different from a modern novel.

The text is in the public domain, so it is available free online from Google books or Project Gutenberg. Amazon will sell you a Kindle version or a print copy.
Posted by Chuck Stull at 10:45 AM No comments:

Email ThisBlogThis!Share to TwitterShare to FacebookShare to Pinterest
Labels: books 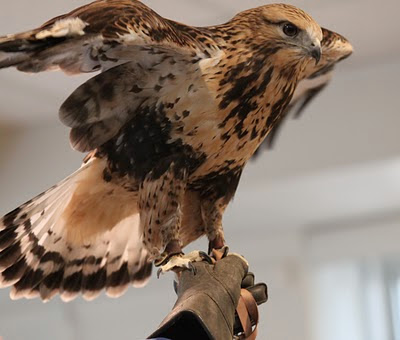 While many birds leave Michigan for the winter, the Rough-legged Hawk (Buteo lagopus) migrates to this area from Canada's far north.

This hawk had been injured and is unable to survive in the wild. It's one of the stars of the Kalamazoo Nature Center's education programs.
Posted by Chuck Stull at 9:00 AM No comments: 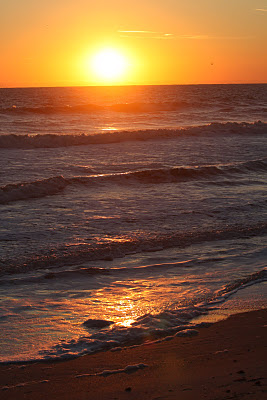 Best wishes for a healthy, active, and engaging 2012.
Posted by Chuck Stull at 10:54 AM No comments: