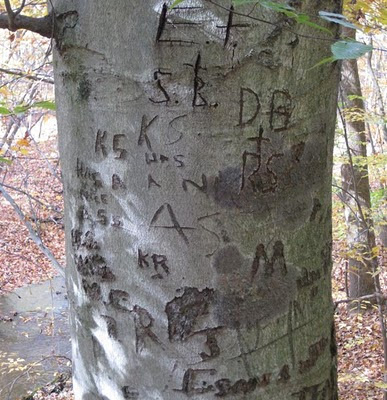 When I was younger, graffiti carved into trees enraged me. I couldn't understand why people would deface nature like that, particularly in parks and nature preserves. Years later, I was surprised to find an explanation in a book on design. Donald Norman, a psychologist and design expert, wrote:

"Affordances
'In one case, the reinforced glass used to panel shelters (for railroad passengers) erected by the British Rail was smashed by vandals as fast as it was renewed. When the reinforced glass was replaced by plywood boarding, however, little further damage occurred, although no extra force would have been required to produce it. Thus British Rail mangaged to elevate the desire for defacement to those who could write, albeit in somewhat limited terms. Nobody has, as yet, considered whether there is some kind of psychology of materials. But on the evidence, there could well be!'

"There already exists the start of a psychology of materials and of things, the study of affordances of objects. When used in this sense, affordance refers to the perceived and actual properties of the thing, primarily those fundamental properties that determine just how the thing could possibly be used. A chair affords ('is for') support and, therefore, affords sitting. A chair can also be carried. Glass is for seeing through, and for breaking. Wood is normally used for solidity, opacity, support, or carving. Flat, porous, smooth surfaces are for writing on. So wood is also for writing on. Hence the problem for British Rail: when the shelters had glass, vandals smashed it; when they had plywood, vandals wrote on and carved it. The planners were trapped by the affordances of their materials."

Similarly the beech tree is trapped by the affordances of its smooth, pale bark.
While initials carved into century-old beeches still make me unhappy, at least I understand it somewhat.

quote from Design of Everyday Things (page 9) by Donald Norman.
Posted by Chuck Stull at 8:50 AM

Email ThisBlogThis!Share to TwitterShare to FacebookShare to Pinterest
Labels: trees