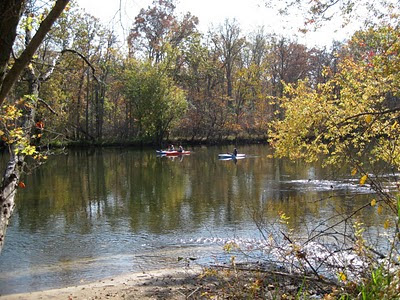 Parts of the Kalamazoo River affected by this summer's oil spill have been re-opened. I've seen several groups of canoes and kayaks enjoying the fall colors on the river between Mozel Avenue in Parchment and D Avenue.

The river remains closed, however, between Battle Creek and the Morrow Dam. When I visited River Oaks County Park last weekend, booms were still in use and the boat ramp area was fenced for the clean-up crews. Apparently the clean-up is now focused on dredging for oil that sank into the riverbed.

River Country Journal reports the opening of the section of the river near Plainwell that had been closed for PCB clean-up.

update: Most of the river re-opened in June 2012