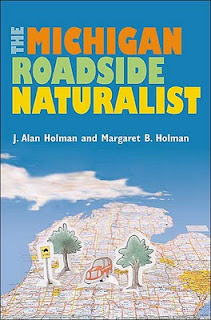 An earlier post discussed some of this guide's geological and archeological facts. Another post looked at the route through Kalamazoo. This post looks at the southern section of their Lake Michigan Route, relatively close to Kalamazoo. The complete route ends in Mackinaw City

1. Archeological Sites on the Galien River
"Several small seasonal encampments were excavated in the bluff overlooking extensive wetlands along the Galien River at New Buffalo. These Upper Mississippian sites were used in the spring for gathering American lotus tubers that were roasted in deep pits, for gathering raspberries in the summer, and for hunting deer in the autumn."

2. Warren Woods State Park
"An important virgin stand of various hardwood trees including several species that are typical of more southern areas in the Carolinian Biotic Province such as the shagbark hickory as well as a few giant red pines." Rare warblers during spring migration.

4. Grand Mere State Park
"This is one of the finest bird-watching areas in the state."


6. Van Buren State Park
"Another lakeshore park, and it is bordered by wooded, stabilized sand dunes."

7. Shipwreck
"In November 1891, a schooner called the Rockaway was carrying lumber from Ludington to Benton Harbor when it was lost in the Lake Michigan waters off South Haven."

8. Michigan Maritime Museum
South Haven at the Black River Bridge
"Exhibits relating to the maritime history of Michigan from Indian canoes to Great Lakes freighters." Archeologists from this museum excavated the wreck of the Rockaway.

9. Saugatuck Dunes State Park
"A difficult one-mile hike to the beach from the parking lot over wooded dunes cuts down the crowds."

10. Archeology on a "different" River
"The Kalamazoo River empties into Lake Michigan at Douglas and Saugatuck a few miles south of Holland. This river is unusual in comparison to other west Michigan rivers, the St. Joseph, the Grand, and the Muskegon. The Kalamazoo River, for most of its length, lacks the mature floodplains found along the other rivers, where each spring the waters overflow their banks, then recede so that a broad expanse of dry land is left where seed plants can grow. On the other hand, there are many broad a permanently wet swamps and marshes along the Kalamazoo." This lead to different uses in prehistoric and historic periods: Ottawa/Odawa would hunt along the Kalamazoo in winter. The Potawatami would use the same river at different times of year. Upper Mississippian sites from 1450-1550 show season use. Late Woodland people moved along the river year-round.

11. Historic Holland
"One of the centers of Dutch culture in southwestern Michigan."

Available from Amazon, Barnes & Noble, or, perhaps, at your local library.
Posted by Chuck Stull at 5:40 PM