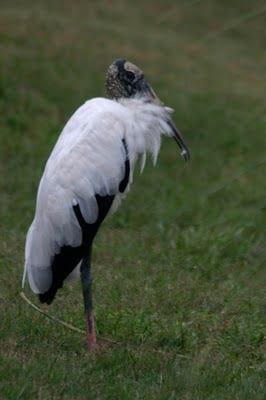 Wood storks (Mycteria americana) are an endangered species in the U.S. Their population crashed in 1978 presumably because of disruption of their wetland habitat. (So their history is different from some Florida wading birds whose populations plummeted nearly 100 years earlier during the plume-hunting era.) Wood storks received federal protection in 1984 and since then their numbers have increased. (See a 1997 review by the Fish & Wildlife Service pdf.) At the end of 2010, Federal wildlife managers were reviewing its status and were considering a change from "endangered" to "threatened".

Like herons and egrets, these long-legged,long-necked birds, eat fish, frogs, and other aquatic life. They are, however, the only true stork in the United States.


This post is part of a series on Florida's Gulf Coast
Posted by Chuck Stull at 6:59 AM