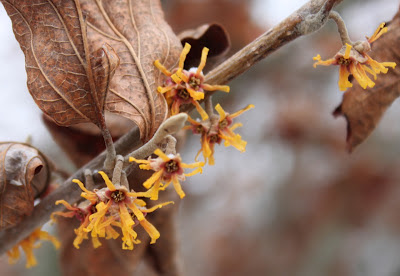 Early March, with snow on the ground, isn't usually the time for flowers in Michigan so I enjoyed seeing Witch Hazel in bloom last weekend at the Kalamazoo Nature Center. The flowers were very small but fragrant.

Witch Hazel is a large bush or small tree widely distributed in Michigan and throughout the eastern U.S. and Canada.

The plants I saw were planted at the edge of the parking lot at the nature center and were tagged Hamamelis virginiana. But, I'm not sure. Several sources suggest Hamamelis virginiana blooms in late fall. Another species of Witch Hazel, Hamamelis vernalis, which is native to the Ozarks, does bloom in Winter.

Witch Hazel has been used and is still used medicinally.
Posted by Chuck Stull at 7:00 AM