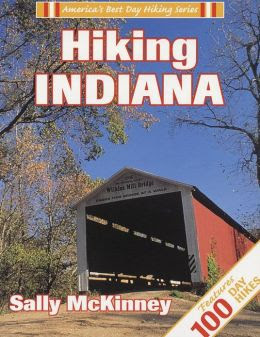 This guidebook, by the author of  Country Roads of Indiana, covers 100 day hikes in 45 parks throughout Indiana.   It's part of the same series as Hiking Michigan  and it features the same "Trail Finder": a list of all the trails that summarizes distance, difficulty, and trail features.   Each entry includes a trail map, a thumbnail state map showing its location, information about the park or recreation area, description of the trails, and a list of nearby points of interest.  The book includes a few black and white photos.  The hikes are divided into three regions: north, central, south.

Other areas of interest:  Lake Maxinkuckee

Other areas of interest: Pinhook Bog

5. Indiana Dunes National Lakeshore
Miller Woods 1.1 miles
West Beach-- Dune Succession Loop 1 mile
West Beach Loop 1.65 miles
Cowles Bog to Beach 2 miles
Beach to Cowles Bog 3.0 miles
Chellberg Farm Loop 1.2 miles
"Behind the beach are the shifting sand dunes and behind them the swales, or depressions.  Farther back from the lake, there may be forest, then a marsh, than another type of forest, then a stream."


6. Chain O'Lakes State Park
Self-Guided Nature 0.5 miles
Sand Lake 1.3 miles
"Canoeists can put in at Miller Lake; paddle east through channels connecting three small lakes; and cross Sand lake, Bowen Lake, and Dock Lake before arriving at Long Lake, which is the end of the chain.  Hikers find trails around these lakes and use bridges to cross the narrow channels."  In this park, the lack of motorboats greatly enhances ta wildlife-watching experience."
Other areas of interest: Lake Wawasee, Lake Webster, Sylvan Lake

7. Pokagon State Park
Hell's Point 2.5 miles
Bluebird Hills  2 miles
"Before European settlers came, this area was favored by the Potawatomi Indians.  In fact, Pokagon State Park is named for two Potawatomi leaders, a father and son, who transferred title to three million acres to the federal government for about three cents an acre."
Other areas of interest:  Pigeon River Fish and Wildlife Area


This book seems to be out of print.  Amazon or  Barnes & Noble may have used copies.  Both Amazon and Google books let you preview selected pages of the book.  I borrowed a copy from my local library.
Posted by Chuck Stull at 9:27 AM