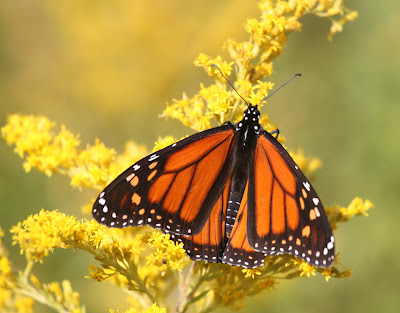 The Monarch (Danaus plexippus) is probably the best-known butterfly species found in Kalamazoo. Of course, it's a popular species across the US and has been named the official insect of seven states. The bright colors, while attractive to humans, warn predators of the monarch's bitterness. This protection comes from consuming milkweed. The Viceroy butterfly is protected by its similar coloring.

Michigan's Monarchs are currently migrating south where the will spend the winter in Central Mexico. A Western Michigan scientist's work on Monarch migration was featured in a National Geographic news story earlier this year. I'm impressed by the distances these small creatures can cover.
Posted by Chuck Stull at 9:01 AM