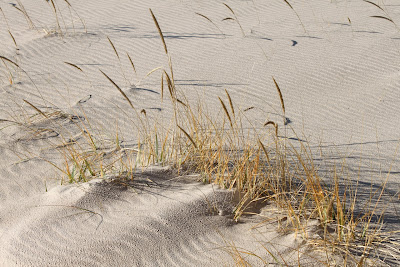 Marram Grass (Ammophila breviligulata), also called American Beachgrass, is a characteristic plant of Michigan's sand dunes. This pioneer species survives on Lake Michigan beaches by outgrowing the blowing sand. Its roots stabilize the sand, forming dunes. Prairie grasses, like Little Bluestem and Switchgrass, can grow on the stabilized sand behind the Marram Grass. Eventually, woody plants and trees grow on the stable dunes, ultimately forming a maple-beech climax community. Observations of these plant communities along Lake Michigan were important for the development of the theory of plant succession.

When the protective beach grasses are disturbed, wind erosion can cause a blow-out where whole dunes move rapidly, burying forests, and creating parabolic dunes.

Marram grass also grows on beaches along the Atlantic coast.
Posted by Chuck Stull at 9:40 AM