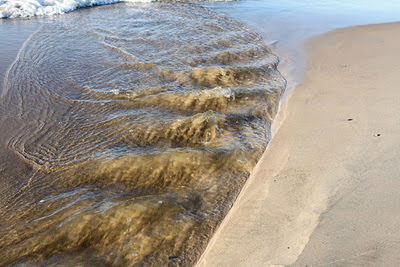 This was just about the strangest water I'd ever seen. These waves developed on a small creek just as it entered Lake Michigan on the beach at Warren Dunes State Park. The water was flowing clear and smoothly until it reached the lake, when these bumps would appear. They didn't flow forward like a regular wave; they just stayed in the same place. It looked like the water was flowing over an invisible log about six or eight inches high. The water would stay that way for a half minute or so, and then either subside back to a smooth flowing stream or collapse backwards with a little whitewater crest. 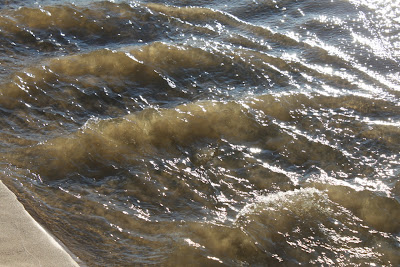 It was fascinating. I couldn't figure it out completely, but it was obvious that the moving stream hitting the lake waves caused some kind of interference that created the phenomenon. Later, I vaguely remembered the term "standing wave" from a physics class. A little internet searching suggests that these are a form of "hydraulic jump" that occurs when a shallow, fast-moving stream moves into deeper, slower water.

I'd been to this creek numerous times in the past & never saw this happen. On Friday, I guess the speed and depth of the creek crossing the beach were just right. I'll certainly look for it in the future.

Here's a short video of the standing waves.