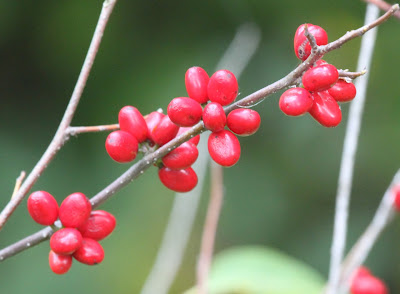 Fall is the season of many nuts and berries including the eye-catching fruits of the Spicebush (Lindera benzoin)  This shrub grows in partly-shady areas with moist soils.  It's widely distributed in the eastern United States and found throughout southern Michigan.

It blooms in early Spring (mid-March, this year) before the forest leaves have opened.  The flowers, while tiny, are bright enough to make an eye-catching display of yellow among the bare branches.  Later in the year, it's a host plant for the Spicebush Swallowtail butterfly.

The colorful berries (or drupes) are eaten by many different animals and a mixed flock of birds were feeding on them when I saw these.  Apparently people also consume these fruits, using them as a replacement for allspice.  People also make tea from the twigs.  In 2011, the Herb Society named Spicebush the Native Herb of the Year.
Posted by Chuck Stull at 9:24 AM