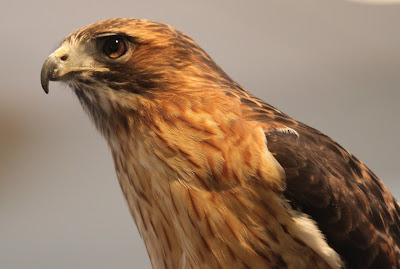 Red-tailed Hawks (Buteo jamaicensis) are the most common hawk around Kalamazoo. I nearly always see one or more when I'm driving on the highway, either perched in a tree at the edge of a field or circling overhead. I regularly see them on my short commute to K College. They can be found from Canada to Central America.

Mice and other small rodents are their main food source, but they will also eat rabbits or birds. Young hawks with less hunting experience may eat roadkill.

Mobbing is an interesting phenomenon where groups of crows or blackbirds harass a hawk to drive it from its territory. Attacking such a fierce predator seems like it would be suicidal, but the smaller birds have enough maneuverability to make it a successful strategy.

The classic colors of a Red-tailed hawk are a dark head, back and wings with cinnamon-colored tailfeathers with a light underside. There is substantial variation across individual birds and juveniles don't have the red tail which can make them somewhat harder to identify.

The bird pictured above is used in education programs at the Kalamazoo Nature Center.
Posted by Chuck Stull at 9:00 AM