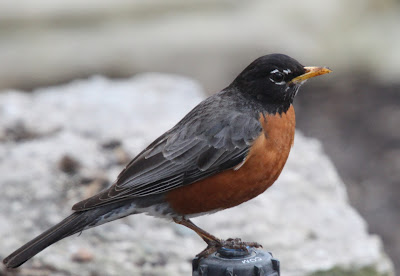 Robins (Turdus migratorius) are a traditional sign of spring in Michigan. Their preferred habitat, open grassy areas for feeding with nearby trees and bushes for protection, matches typical suburban landscaping, so they are one of the easiest songbirds to see. My lawn has been brightened in recent weeks by groups of robins hunting for worms.

Their colorful breast, cheerful chirping, ease of viewing, and association with Spring make them a very popular bird. In 1931, the Robin Red Breast was named Michigan's State Bird.

While robins are known as Spring birds, some do overwinter in Michigan, which makes them a less reliable indicator than the Red-winged Blackbird or the Turkey Vulture. Their Latin name means "migrating thrush" and most robins do migrate south for the winter and return north in the Spring.

The American Robin is named after the red-breasted European Robin, but they aren't closely related.
Posted by Chuck Stull at 9:06 AM