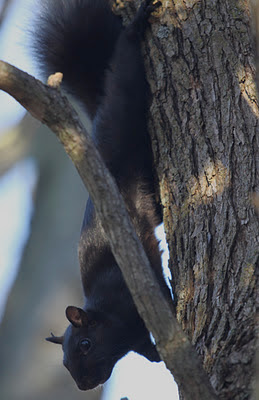 Black squirrels are a color morph of the Eastern Grey Squirrel (Sciurus carolinensis) which is widely distributed throughout the Eastern United States and Canada. The black variety is relatively rare, with localized populations becoming something of a tourist attraction. Southern Ontario and Michigan seem to have relatively large numbers of black squirrels. Legend says W.K. Kellogg brought black squirrels to the area. (Personally, I'm somewhat skeptical of this; black squirrels seem too broadly distributed in the area to have come from a single source.)

My backyard is full of Fox Squirrels, Red Squirrels, and Chipmunks so I never see Grey Squirrels (of whatever color) in my yard. But, a few miles south in Portage (near Centre Avenue) I always see black squirrels. The squirrel pictured here was at Portage's West Lake Nature Preserve. 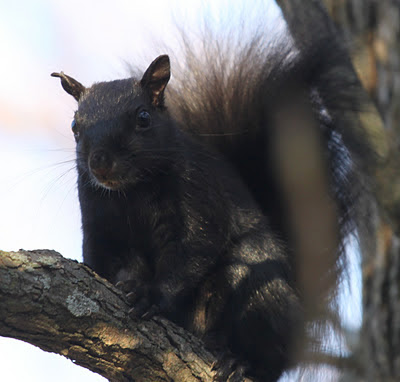 See also: Myths and Realities of the Mysterious Black Squirrel
Michigan's Squirrels
Information on many Squirrel species
Posted by Chuck Stull at 9:05 AM