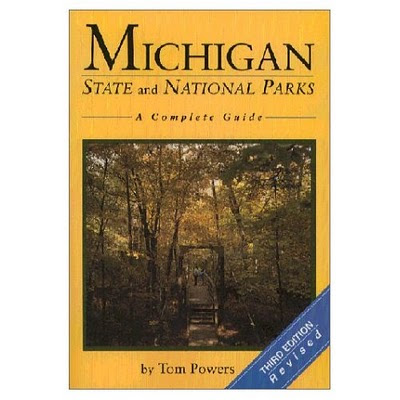 Tom Powers, author of Natural Michigan and other guidebooks, describes 100 Michigan parks with park maps and black & white photos. The National Parks are all up north, but there are several state parks near Kalamazoo.

2. Kal-Haven Trail State Park
"The route follows an old, unused stretch of the Penn Central Railroad from South Haven, on the shores of Lake Michigan to Kalamazoo."
34 miles of trail, hiking, biking.


3. Van Buren State Park
"A wide sidewalk leads through a single narrow opening, and it's not until you're almost completely through the sand wall that the view opens to reveal the park's main attraction: limitless blue waters of lake Michigan edged by a broad sweep of fine black-speckled sand."
Camping, beach, picnic area

4. Yankee Springs Recreation Area
"There's no doubt, though, that most of the 600,000 people a year who come to the park funnel to the beautiful picnic and beach areas lining the peninsula that juts so far out into the water it almost cuts Gun Lake, the park's largest, in half"
Camping, rustic camping, boating, water skiing, hiking, mountain biking, horse trails, hunting, fishing, x-country skiing.


5. Saugatuck Dunes State Park
""The shortest route to the beach is a l...o...n...g one-mile slog over wooded dunes from the parking lot. That's quite a hedge against overcrowding."
Trails (14 miles), beach, x-country skiing


6. Holland State Park
"Each year a million and a half visitors take advantage of the fact that the long, broad beach that edges Lake Michigan northwest of Holland is one of the most accessible and beautiful along the Lower Peninsula's west shore."
Beach, camping (separate unit), boat ramp, fishing


7. Grand Haven State Park
"Essentially, the park is the beach; only a slab of asphalt and a few buildings interrupt the wide, nearly flat expanse."
Beach, RV camping, fishing.


8. Grand Mere State Park
"The dunes, forests, Lake Michigan shoreline and string of small interdunal lakes are part of the reason that Grand Mere is one of only a dozen Michigan areas listed among the country's National Natural Landmarks."
Trails, picnic area, fishing, dunes, beach


9. Warren Dunes State Park
"Even if you're a longtime resident who has seen what wind, water, and sand has created elsewhere along our 3,121 miles of Great Lakes frontage, you will be unprepared for your first-time visit here."
Camping, beach, trails, picnic areas, dune climb

10. Warren Woods State Park
"The unique area is the legacy of E. K. Warren, a local businessman who in the 1870s, when most people saw nothing but dollar signs in Michigan's great forests, had the unusual foresight to purchase the virgin hardwood stand with the sole intent of saving it for posterity."
Trail, birdwatching

My library has the Third Edition. You can order the Fourth Edition (2007) from Amazon or other retailers.