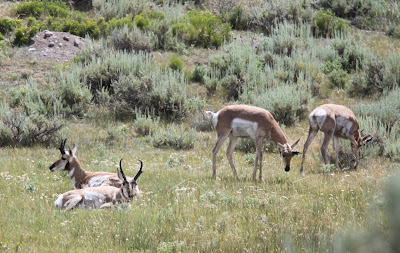 Pronghorns (Antilocapra americana) are America's fastest land animal.  While they look superficially like deer, they are more closely related to antelopes.  Instead of antlers, both males and females have horns with a bone core.  The males' horns are larger.  Unlike deer, Pronghorns are poor jumpers which makes fences a problem for them, particular during migration.  Like deer, Pronghorns have a split hoof with two distinct toes.

Pronghorns are natives of the Great Plains and their range is restricted to the Western US and Canada.  At its peak, the Pronghorn population numbered in the millions.  Overhunting, and changes in land use, caused a population crash; by the 1920s, only around 26,000 Pronghorn remained.  Conservation efforts by State and Federal governments, supported by hunting organizations, allowed the population to rebound.  Efforts to protect the Pronghorn continue today. 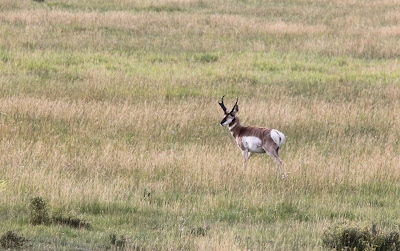 This post is part of a Road Trip series