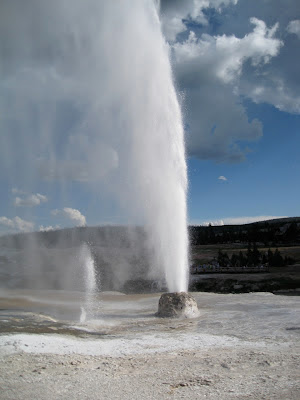 Yellowstone National Park is famous for its thermal features: geysers, hot springs, mud pots, and fumaroles.  The park is also well-known for wildlife: bears, bison, bighorn sheep, and the recent reintroduction of wolves.  Other attractions include numerous waterfalls, Yellowstone Lake, the grand canyon of the Yellowstone, and fly-fishing.

Yellowstone is America's oldest national park, established in 1872 by an act of Congress that "dedicated and set apart as a public park or pleasuring ground for the benefit and enjoyment of the people."  UNESCO designated it as a natural World Heritage site.  At over 2 million acres, it's the second largest park in the lower 48 states.  The park attracts over three million visitors each year, most of them during the summer. 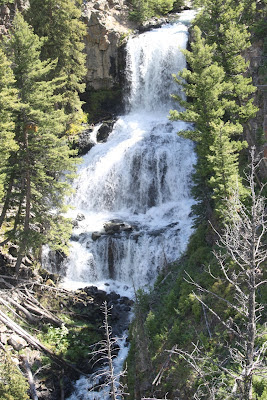 Yellowstone's popularity means it is often crowded.  Reservations for the park lodges fill months ahead of time.  Four large campgrounds, operated under concession by Xanterra, use the same reservation system.  We made reservations for early August, a peak time, and some of the campgrounds were fully reserved several weeks in advance.  The big campgrounds don't offer a lot of space or solitude.  There are several smaller campgrounds that don't accept reservations; those usually fill early in the morning. 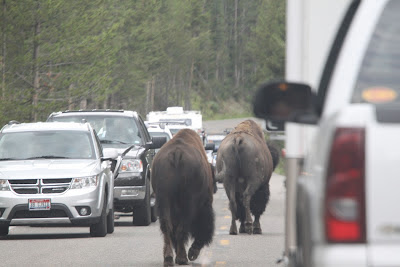 The Grand Loop is a 142 mile, figure-eight road that connects most of the park's main attractions.  We spent several days in the park and spent a lot of time on that road, often in traffic.  Next time, I'd reserve a campsite in the western part of the park for half the time, and then move to a campsite on the other side to reduce driving times.  Not only are distances inside the park long, there are frequent wildlife jams-- when a bear sighting or a herd of bison on the road, bring traffic to a stop. 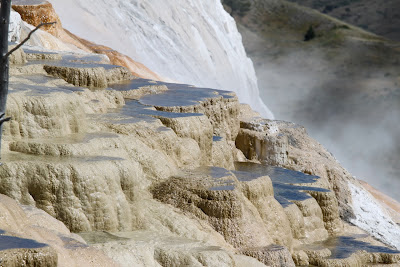 distance from Kalamazoo: 1600 miles
This post is part of a series of Road Trip posts.
Posted by Chuck Stull at 7:00 AM