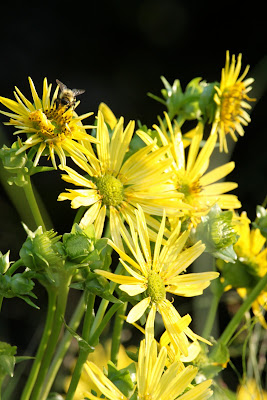 Mid-summer is peak time for prairie flowers and Cup Plant (Silphium perfoliatum) is one of the most impressive. Clusters of large yellow flowers top stems that can be over 6 feet tall. The height and its unusual leaves distinguish it from other tallgrass wildflowers. The opposite leaves meet at the stem, forming a cup. This morning there was enough dew to fill it. 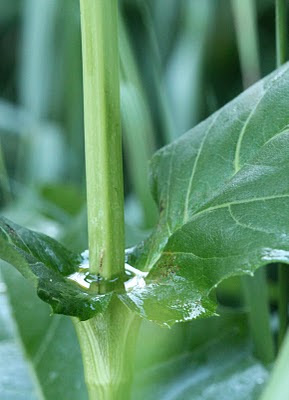 Where to Weekend around Chicago

Where to Weekend around Chicago
Fodor's
editor: William Travis
2004

1. Michigan City
"Today it is still the dunes, the maritime history, and modern attractions such as an outlet mall or casino that keep a steady stream of visitors coming to Michigan City looking for shoreside escape. Although the city has seen its share of the problems plaguing urban areas, renewal and revitalization projects have continued apace."

2. South Bend
"But it wasn't the gridiron greats that truly shaped this city; entrepreneurs played a major role in its history. In 1852, the Studebaker brothers established a modest wagon repair and horseshoeing shop. Their business ultimately evolved into an automotive giant known for its convertible with a bullet-nose grill before it closed in 1963."


3. Amish Country
"Amish Country, off the 75-mi corridor from South Bend southeast to Fort Wayne, is rife with odd juxtapositions. The abundance of recreational vehicle manufacturers in Elkhart or nearby in Goshen or Middlebury is found alongside establishments in which Amish artisans are crafting fine furniture using methods that have been passed down from generation to generation. ... And yet time can seem to stand still on the back roads here. Fresh-faced children, boys wearing straw hats, and girls in bonnets pile in horse-drawn black-box buggies clip-clopping along dusty country roads."


4. South Haven & Saugatuck/Douglas
"Southwestern Michigan is the Midwest's version of Cape Cod-- and the cites that epitomize that laid-back beach resort feeling are Saugatuck, Douglas, and South Haven.


5. Grand Haven and Holland
"Holland and Grand Haven, though only 20 mi apart, couldn't be more different. Holland is known for its "Dutch Touch." Tulips bloom along the streets in spring, and the staff at Dutch attractions wear klompen, or wooden shoes. Although it has a beach on Lake Michigan and on the smaller Lake Macataw, the waterfront isn't the center of community life. Its northern neighbor Grand Haven, however, revolves around the water. The city's downtown is perpendicular to the Grand River and sits just 2 1/2 mi from a flat, sandy beach on Lake Michigan."

6. Battle Creek & Marshall
"Lying in agricultural land in west-central Michigan, Battle Creek is part of a cluster of towns-- Kalamazoo and Holland (to the west), Lansing (to the north), and Ann Arbor (to the [east])-- essential to the state's fortunes and each known nationwide. Along I-94 and the smaller roads of the area you can see farmland rich enough to grow both cereal grains and the fruit that goes on top. Battle Creek sits in a valley around the confluence of its eponymous creek and the Kalamazoo River, the former once the power source for local industry, the latter a slow-and-steady river flowing through the Fort Custer Recreation Area and on through the neighboring towns of Marshall and Albion."

7. Ann Arbor
Above all else, Ann Arbor is known as the home of the University of Michigan. The school, founded in 1837 in Detroit, dominates geographically, culturally, and economically. Atlases may list the population as 114,000 9it can be twice that size on football Saturdays), but Ann Arbor provides enough culture and cuisine to power a fair-size city."

To see & do
Delhi, Dexter-Huron, and Hudson Mills parks
Nichols Arboretum
U of M
Zingerman's

This guidebook seems to be out of print but the Amazon listing has the "look inside" feature. Fodor's website doesn't seem to have it. My copy was from the library. Allgetways has selections from the guidebook online.
Posted by Chuck Stull at 7:00 AM No comments: 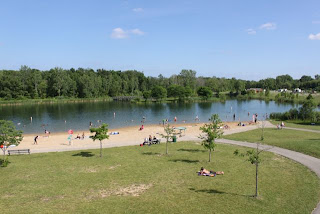 Markin Glen County Park was donated to the public by the Markin family, founders of Kalamazoo's taxi manufacturer Checker Motors. The west section of the park is one of my favorite places for Spring wildflowers. The east section of the park has a swimming beach, RV campground, picnic shelters, and paved trails.

$5 admission or season pass.
Posted by Chuck Stull at 7:00 AM No comments: 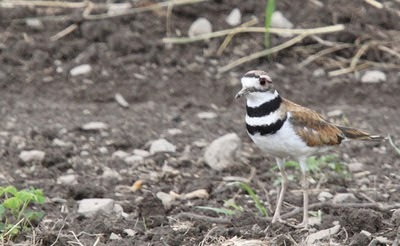 Killdeer (Charadrius vociferus) look like sandpipers who lost their way to the beach. These members of the plover family are commonly found in farm fields or park lawns. They lay their spotted eggs on the ground & protect them through deception.

If you walk near a nest, the adult killdeer will feign a broken wing and flap awkwardly along the ground, while crying loudly. It's a very eye-catching display, intended to draw predators away from the eggs. 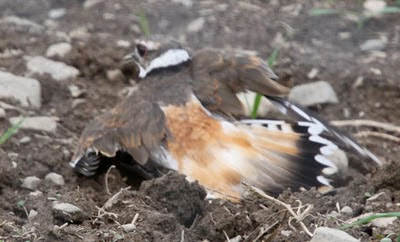 If you follow the bird, it will struggle at ground level, moving away from you at a slow pace, apparently easy prey. 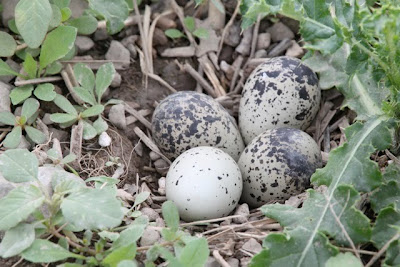 This display continues until you (the threat) have followed it away from the nest. Then, the killdeer "miraculously" cures itself and flies away with strong wingstrokes.
Posted by Chuck Stull at 7:00 AM No comments: 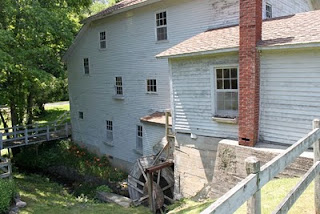 Scotts Mill County Park features an old mill and waterwheel. It's more of a historic attraction than a recreation park but it does have a short hiking trail along the millpond and a picnic shelter. It's probably most interesting when the Scotts Mill Olde Tyme Power Equipment Association holds an event in the park. Tractor show July 16-18, 2010. Harvest Festival Oct 2-3, 2010 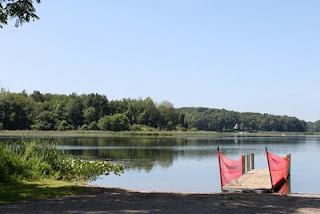 Coldbrook County Park offers one the few public campgrounds near Kalamazoo. It has separate loops for rustic and modern camping. The park also has a swimming beach, picnic area, playground, boat access to Portage Lake, and a popular frisbee disc golf course. 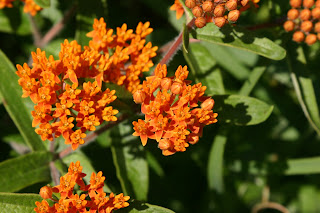 While the woodland wildflowers of Spring tend to attract more attention, the summer prairie wildflowers are much showier. Butterfly Milkweed (Asclepias tuberosa) is one of my favorites. Its striking orange flowers stand out among the numerous yellow blooms of the tallgrass prairie. It blooms for weeks and, as its name suggests, attracts butterflies. While the nectar feeds the adult butterflies, the plant itself is a good food source for Monarch caterpillars.
Posted by Chuck Stull at 7:00 AM No comments: 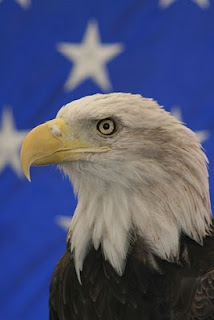 Happy Fourth of July!
Posted by Chuck Stull at 7:00 AM No comments:

Email ThisBlogThis!Share to TwitterShare to FacebookShare to Pinterest
Labels: Summer 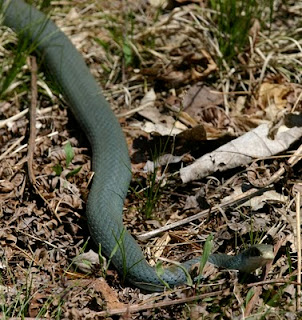 The Blue Racer (Coluber constrictor foxi) is an impressive but harmless snake found in Michigan. They eat insects, mice, and small reptiles. Young blue racers don't have the striking blue color, but a mottled pattern for camouflage. Related sub-populations have a variety of different colors.


Ontario protects Blue Racers as an endangered species and Minnesota lists them as a "species of special concern".
Posted by Chuck Stull at 7:00 AM No comments: