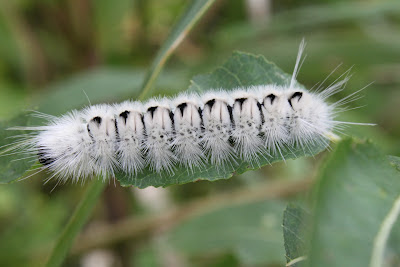 I was taking a walk near the Kalamazoo River enjoying the early fall colors when this striking white caterpillar with black spots caught my eye.  I think it's a Hickory Tussock Moth caterpillar (Lophocampa caryae).  Many slow-moving insects are camouflaged to hide from predators.  This hairy caterpillar uses the opposite approach: its colors warn predators not to eat it.  The hairs are stinging spines that can deliver a dose of toxins.  This defensive mechanism can cause a skin rash for people, if they touch this little creature.

In a few weeks, this caterpillar will weave a cocoon.  After winter is over, it will emerge as a moth.

The Discover Life website has a useful tool for identifying caterpillars.

Posted by Chuck Stull at 9:36 AM No comments: 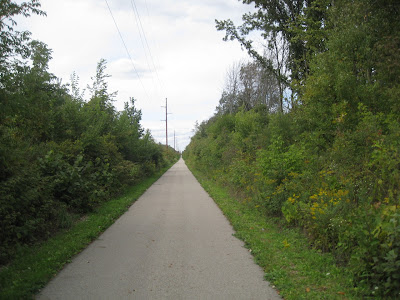 Last Fall, I rode a short section of the Paul Henry Thornapple Trail starting in Middleville.  A few days ago, I re-rode that section (which was beautiful, with a large number of Sandhill cranes on the millpond) and then decided to try another segment of the trail.  This section started in Caledonia, a few miles north of Middleville.  Since I hadn't planned to ride both parts, I didn't note where the Caledonia trail started but it was easy enough to figure out by considering its history.  The trail runs along an old Grand River Valley Railroad right-of-way which linked industries and businesses that needed freight transportation.  The biggest buildings in Caledonia are in a complex of grain elevators, that were served by the railroad years ago.  Once I saw the elevators, I guessed the trail would be nearby and found it quickly.  (On Main Street, just west of Mill Avenue.) 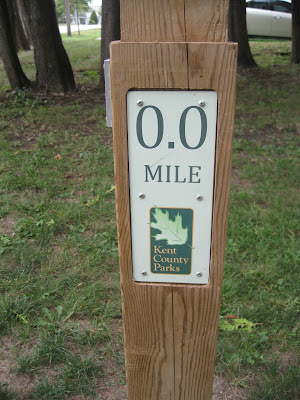 The trail was smoothly paved asphalt and ran for about 5 miles to suburban Grand Rapids.  The trail seemed to alternate between right-of-ways for the old rail line and current powerlines, so long stretches would be perfectly straight, then a few turns would connect to a new section.  Near Caledonia, the trail offered short connecting paths to Caledonia Lakeside Park  and the Caledonia High School.  Outside of town, the trail passed farms and fields.  Approaching Grand Rapids, new suburban homes sprung up from cornfields and in the distance I could see the airport tower.  The trail ended at the intersection of 68th Street and E. Paris Avenue, next to a Steelcase factory and a landscape supply business.

Future plans are to extend the trail south to Middleville (and beyond) and to connect to the Kent County Trail system to the north.  This will be a great ride when it's complete. 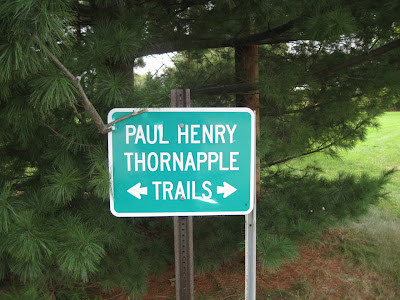 Posted by Chuck Stull at 8:07 AM No comments: 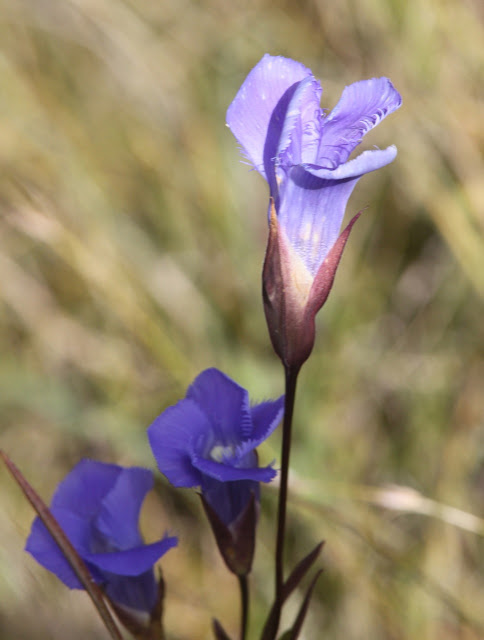 Fringed Gentian (Gentianopsis crinita) is one of the star wildflowers of fall.  While Fringed Gentians grow in many Eastern states and provinces, they aren't particularly common anywhere.  I've only seen them in wet, sunny places.  Many years I miss them completely, but they are in bloom now and certainly worth looking for.  Gentians are often associated with calcareous soil (rich in calcium carbonate).  They are a biennial plant, living for two years. 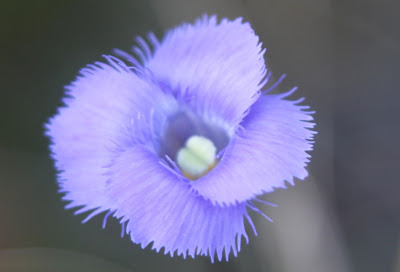 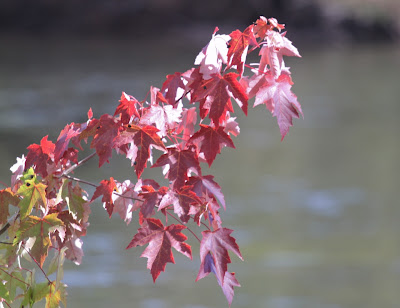 Cooler days and longer nights remind us that summer ends with the Autumn equinox this Saturday.  These changes also trigger chemical changes in deciduous tree leaves causing greens to be replaced by reds and yellows.  So far, most of the trees in Kalamazoo are still green but some early color is visible.

Virginia Creeper and Poison Ivy show the brightest colors now and Red Osier Dogwood leaves are turning purple.  Silver Maples are starting to change; they're one of our earliest trees to turn red.  I did see some scattered orange leaves on other maples and oaks, but they are predominantly green.

West Michigan's Weekly Color Report indicates similar conditions across most of Michigan, although some northern areas expect peak color to be early this year.

Email ThisBlogThis!Share to TwitterShare to FacebookShare to Pinterest
Labels: Fall 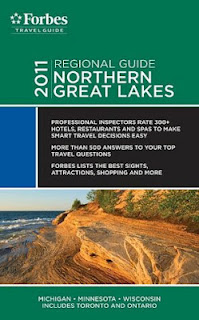 This travel guide by Forbes continues a long-running book of ratings published by Mobil.    The Northern Great Lakes guide covers Michigan, Minnesota, Wisconsin, and Ontario.  Each state's attractions are divided into regional sections.  For Michigan, the regions are: Northern Michigan, Southwest Michigan, Detroit, Southeast Michigan, Bloomfield Hills, and the Upper Peninsula.  Restaurants, hotels, and spas are rated on a 5-star scale.

Other types of attractions are listed without a rating, although some are highlighted under a question like, "What are Some of Michigan's Best Wineries?"  (Fenn Valley, St Julian, Tabor Hill, Warner Vineyards) or "What are some of the Best Places for Outdoor fun in Southwest Michigan?" (Dutch Village, Meijer Gardens, Michigan's Adventure, Musical Fountain, Warren Dunes State Park.)  Listings give a short description (a sentence or two) and contact information.  There are no illustrations or maps.

Here is a selection from their listings near Kalamazoo

It's available from Amazon,  Barnes & Noble, and other booksellers.  I borrowed a copy from my library. 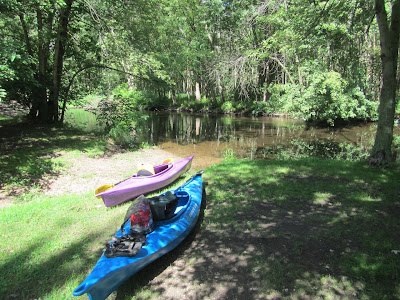 The Prairie River was a fun paddle.  The water was clear and shallow, so we could see a variety of fish.  It wound through bottomland forest with plenty of Silver Maples and Sycamores.  (It should have some gorgeous fall color soon.)  Shallow roots and wet soil meant a lot of deadfall across the river, so we needed to frequently maneuver around obstacles.  This made the trip more challenging than many other local rivers, but it didn't get frustrating and we never had to get out of the kayaks to go around or over a barrier.  (Thanks to Liquid Therapy outfitters who cut openings to keep the river runnable.)

The Prairie River is about a half hour drive south of Kalamazoo.  We paddled from Centreville to Lutz Rd just south of Three Rivers, about six miles, in three and a half hours.  Hoshel Canoe Park, about halfway through this section, off Hoshel Road, looked like another good place for a put-in or take-out.  Most of the river feels very natural, with only the occasional house visible.  There were a few farms, some with industrial-sized irrigation pumps, but mostly it was woods.  There were some spectacular patches of Cardinal Flower in bloom. 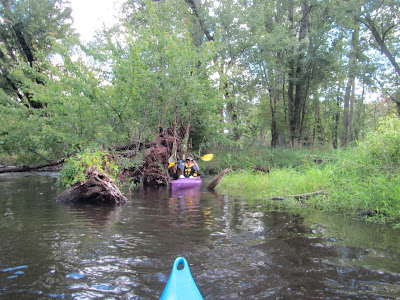 Posted by Chuck Stull at 7:53 AM No comments: 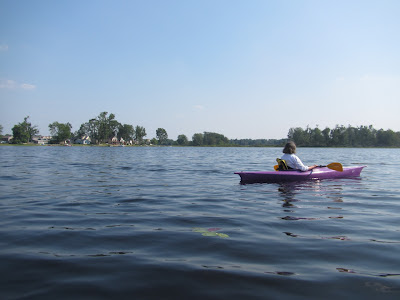 Three Mile Lake is about 25 miles west of Kalamazoo, just off of I-94.  It's a mid-sized lake (176 acres) with an unusual shape-- kind of a curving T-- which means you can't see the whole lake from any particular spot.  (Michigan's DNR provides a map [pdf].)  A shallow channel connects to Little Three Mile Lake.

Threemile Lake came to my attention since it is one of the few lakes with motorboat restrictions.  We visited on a hot afternoon and lots of people were cooling off in the lake at the boat launch.  Houses lined the eastern shore while the western shore was pretty much undeveloped.  There were a few noisy jetskis and waterskiers (since the speed restrictions don't go into effect until evening.)  Little Three Mile Lake was quieter, with just a few people sunning on their docks.  We saw three Sandhill Cranes among the lilypads on the smaller lake and a couple of Great Blue Herons.

Posted by Chuck Stull at 8:41 AM No comments: 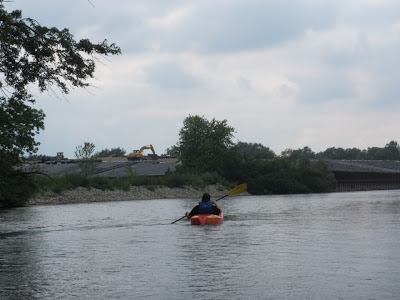 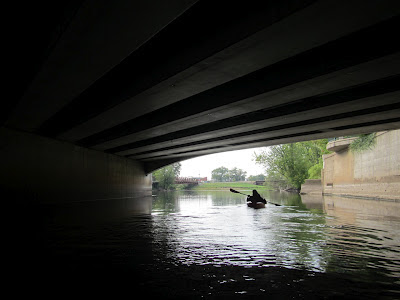 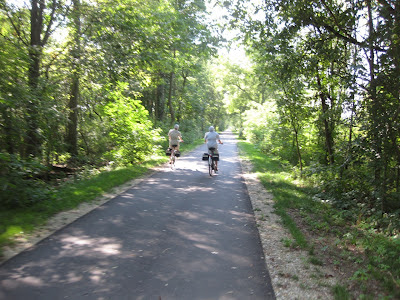 The Pumpkinvine Nature Trail in northern Indiana is about an hour's drive south of Kalamazoo.  Last summer we rode a section near Goshen.  A few days ago, we rode from Middlebury to Shipshewana,  in the heart of Indiana's Amish community.

In Middlebury, there was plenty of parking available at the Town Hall and some spots available at the neighboring Dairy Queen.  The trail segment started from the Dairy Queen parking lot on a gravel path marked only by the restaurant's "Drive Thru" sign.  Except for a short gravel section at the beginning, the trail was smoothly paved with asphalt.

The ride to Shipshewana was relatively short, about six miles, through pretty countryside.  Windmills and draft horses signaled an Amish farm.  Most of the non-Amish farms seemed to have satellite dishes.  All of the farms were small scale, so the scenery changed frequently as we rode past: some cows, some corn, horses, woods, and pastures.  One farm even had camels.

The trail ended just before Shipshewana, so we rode the few blocks into town on County Road 250 which had a separate lane for buggies and bikes. 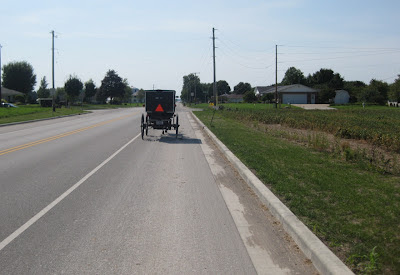 Shipshewana itself is a big tourist destination, so there were plenty of options for a mid-ride snack.  Shipshewana does have a parking lot designated for the Pumpkinvine Trail with small signs directing riders through town to the trail. 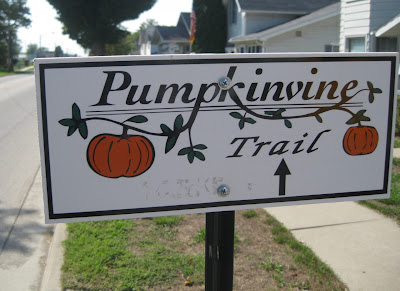 The Maple City Walk, on the Pumpkinvine Trail out of Goshen, will be Saturday, September 29, 2012
Posted by Chuck Stull at 9:17 AM No comments: