Bow in the Clouds Preserve 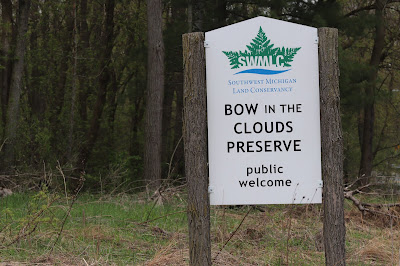 Somehow I had never visited Bow in the Clouds Preserve, even though it's just a few miles northeast of downtown Kalamazoo.  The preserve was originally part of the Nazareth Campus of the Sisters of Saint Joseph.  They donated it to the Southwest Michigan Land Conservancy several years ago. 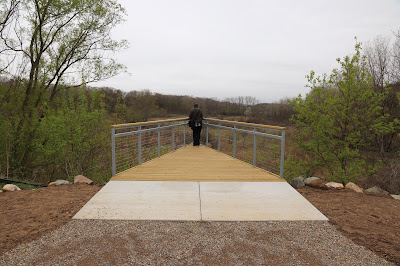 The entrance is off Nazareth Road, about a half mile north of Gull Road.  There's a good-sized gravel parking lot beside an old barn.  The SWMLC just completed an accessible trail with an overlook to the marsh.  (Grand opening event May 11, 2019.)

From the new loop trail, a dirt (non-accessible) trail drops down to the marsh itself.  Look for the blue metal blazes.  An extended boardwalk took us right through the marsh, where we saw woodpeckers, mourning doves, robins, and deer.   Marsh Marigolds added some nice color. 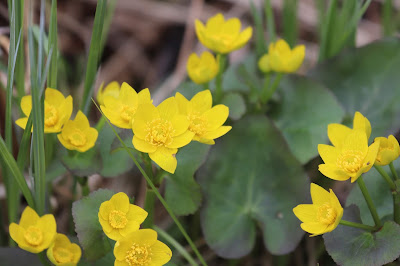 After crossing the marsh on the boardwalk, the trail climbed slightly through some mature woods.  There were some big patches of Mayflowers and one section featured budding Celadine Poppies. Eventually stairs led uphill to the Nazareth Campus. We took another set of steps back down to the marsh and then switched to the trail with white metal blazes.  This trail followed the edge of the marsh and looped north along Nazareth Road to return to the accessible trail and the parking area.