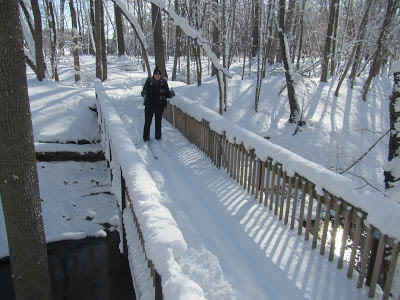 My wife and daughter have just started cross-country skiing, so I've been considering the best local destinations for them.  Steep hills are really hard for someone just learning to ski and overly long trails can make the sport seem exhausting rather than fun, so I was looking for areas that offered relatively level trails and relatively modest distances.

1. Alamo Township Park
Alamo Township Park is far and away the best local option for beginner cross-country skiers.  Three loops wind through a mix of hardwood and conifer forests with a bridge over an attractive creek.  The trails are groomed and never crowded.  This park offers all the beauty of the winter woods without any steep hills and it's close to town.  These trails are nice enough to satisfy more experienced skiers looking for a short outing.

2. West Lake Nature Preserve
West Lake Nature Preserve in Portage offers a nice short loop through the woods very close to town.  It's very accessible for beginners, with no hills.  It's probably too short to attract advanced skiers.  This park attracts lots of foot traffic, so the snow is often packed down and I've never seen good ski tracks established, so it's probably best to visit when there is fresh snow.

3. Milham Park Golf Course
Milham Park Golf Course does have more hills than the other areas on this list.  The hills are steep enough to be fun and they are wide open, without trees or obstacles, so even if a beginner veers off-course they should be okay.  The trails are groomed, when there's enough snow, for both skate skiing and classic skiing.  The golf course doesn't offer the same natural beauty as the other areas and if it's windy it feels colder.  It's right in town, so travel time is minimal.

4. Schrier Park
Schrier Park offers a decent length trail system that can connect to West Lake Nature Preserve through Bishops Bog.  The orchard area near the Osterhout Road entrance is a big open area good for practicing.  The trails have some modest slope, but no demanding hills.  Snow is the big drawback at Schrier Park.  Since its main trails are paved, it takes fairly deep snow to make them skiable.

5. Russ Forest
Russ Forest in Cass County is another good destination for cross-country beginners.  If it was closer to Kalamazoo, I would put it higher on this list.  The trails go through mature forests with some really nice views of Dowagiac Creek.  None of the loops have challenging hills.  The trail system is longer than the others listed here making it worth the drive.


None of these areas charge admission and none offer ski rental.  Lee's Adventure Sports in Kalamazoo does rent skis.  They also have occasional demo days where you can try skis and other equipment.  Two cross-country ski areas that offer on-site rental are within reach for a day trip: Love Creek County Park and Muskegon Winter Sports Complex. Update: Pigeon Creek Park also has ski rentals and its trails are beginner friendly.
Posted by Chuck Stull at 7:00 AM 1 comment: Saturday was Western Michigan University's Winter Carnival.  The main attraction was the Polar Plunge, a jump into freezing cold water through a hole cut in the ice on Goldsworth Valley Pond.  About 50 people took the plunge, which was a fundraiser for Special Olympics. 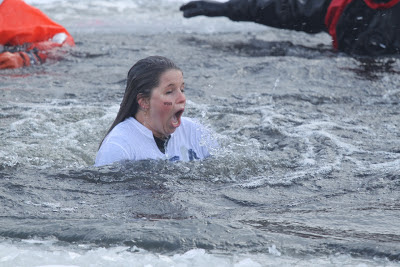 The Kalamazoo Gazette has a story with photos and video.  The Western Herald has slideshows of the carnival and the plunge.  See more of my pictures of this event on Facebook. 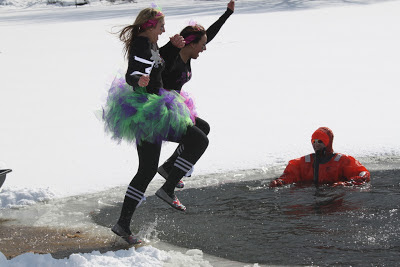 The carnival included music, a snowman contest-- made difficult by the light fluffy snow-- and pizza, doughnuts, and hot chocolate.  A temporary ice rink was erected but not open for skating when I visited.  A cardboard sled contest was planned for later in the afternoon. 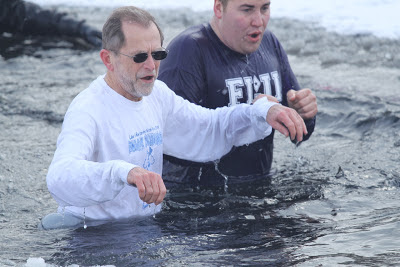 WMU President John Dunn in the freezing water.
Posted by Chuck Stull at 9:47 AM No comments: 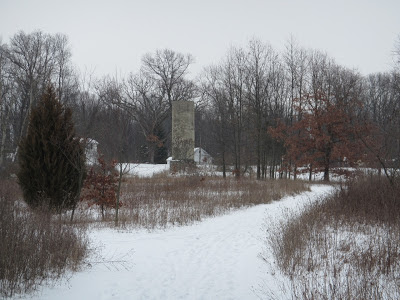 Last winter, I'd hoped to ski at Battle Creek's Woodland Park but there was no snow when I visited.  A few days ago, I returned and, while the conditions were not perfect, I did enjoy skiing the park's trails.  The snow was just deep enough to ski with the occasional rock or root breaking the snow surface.

Like some of my usual Kalamazoo ski destinations, Woodland Park seemed popular with hikers and dogwalkers and most of the trails were packed hard and somewhat slippery.  One loop did have a nice set of tracks set by previous skiers with only a few footprints marring the track.  That trail section offered the best skiing.

The trails were mostly flat with a few rolling hills.  There was one very short but relatively steep slope.  A new bridge over the park's creek opened a loop that would have been inaccessible on skis.  (Last winter I crossed the water on a fallen log, but I couldn't have done that on skis.)  The outer loop was about 2.5 miles long.  With good snow conditions, this park would be good for beginning skiers.

If I lived in Battle Creek, I'm sure this would become a regular winter destination for me. 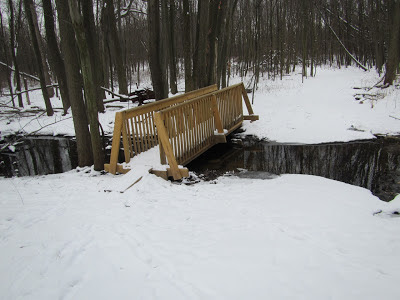 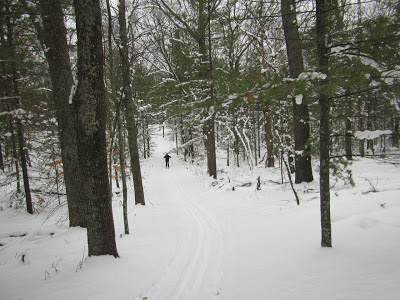 Pentwater Pathways offers some nice skiing just outside the village of Pentwater (about a two hour drive northwest of Kalamazoo.)  Four loops, ranging from two to five miles long, pass through a rolling mix of pine and hardwood forest.  The Pathways are in the Pere Marquette State Forest and are maintained by the Oceana Cross Country Ski Association. (The same group maintains the Crystal Valley trails).

We enjoyed a nice run on the trails last Sunday.  The trails were well marked and maps were posted at each intersection of the various loops.  The snow was reasonably deep and a good set of tracks had been set.  It seemed to be a popular spot, with several groups of skiers on the trails, although it certainly wasn't crowded that morning.  We avoided what Howard Meyerson described as "the hill that rhymes with 'oh spit' " by skipping the fourth loop.

The Get Off The Couch website has detailed descriptions of each segment of the trail, a trail map and driving directions.  The Oceana ski association had xeroxed trail maps available at the trailhead and  printable trail maps [pdf] on their website. 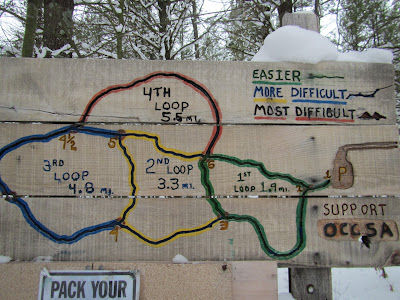 Pentwater Pathways
Cross Long Bridge from Pentwater Bus 31.
Turn left on Wayne Road.
In 1.5 miles there is an unpaved road to the right. There is a sign for Pentwater Pathway. Take this.
In about 0.3 miles the road widens to a parking area at the entrance to the trail.
Plowed by the county.
free
Posted by Chuck Stull at 7:00 AM No comments: