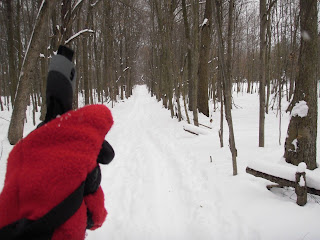 Kalamazoo had more snow last week, enough that the k-12 schools had a snow day and enough to create a new base for x-country skiing. By this weekend, I figured the trails at my favorite ski local spots would have been packed down by snow-shoers, dog-walkers, and ice fisherman, so I thought I'd try someplace different.

It had been several seasons since I skied at the Oshtemo Township Park but I was at a college event there last weekend & decided to return with the next snow in hopes of less trammeled tracks.

Ski trails start near the park's playground and quickly go into the woods with some moderate hills. There had been enough skiers to lay down decent tracks, although the trails get enough use that some had been rubbed out by pedestrians. There seemed to be a frisbee golf tournament Saturday, but the disc golf course has its own paths separate from the trails. The whole system of trails isn't particularly long, but a couple of laps made a nice outing.

The park is on M-43 just west of Kalamazoo. The entrance is behind the Oshtemo Town Hall (7275 West Main Street, west of the intersection of M-43 and 9th St.)
Posted by Chuck Stull at 8:53 AM