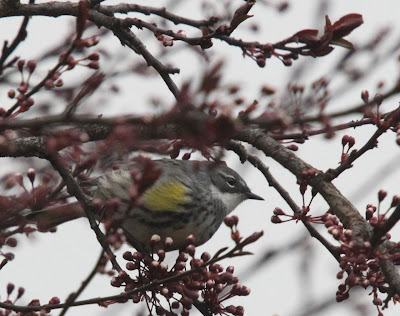 Michigan's spring warbler migration overlaps with its ephemeral wildflower season, perhaps because both depend on insects to some extent (for food and pollination, respectively.) In any case, it's nice to see these small colorful birds in the woods and see wildflowers at the same time.

My warbler identification skills aren't very good, so I lean heavily on guidebooks. The bird pictured above is a Yellow-rumped Warbler (Dendroica coronata) sitting in a plum tree in my backyard.

It's impressive to think about how far these small birds travel, flying from Central & South America to the northern US and Canada. Of course this also means that habitats separated by thousands of miles are interlinked and that ecosystem disruption in one place will affect the others.

While it's a three and a half hour drive from Kalamazoo, I can't resist adding northern Ohio's immodestly named festival: Biggest Week In American Birding May 5-15, 2011