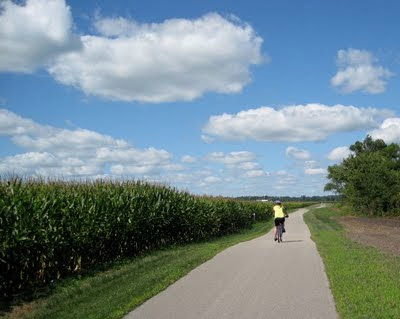 The Pumpkinvine Nature Trail is a developing bike trail about an hour south of Kalamazoo in northern Indiana's Amish area. Several sections of the trail are currently open around Goshen and Middlebury.

We started our ride in Goshen. The parking lot was easy to find on 5th street north of Lincoln Ave, but the trail wasn't immediately visible. It's tucked between a grain elevator and the industrial-looking city waterworks, right next to the train tracks, which, in hindsight, was perfectly logical since the trail was a railroad right-of-way. The trail quickly passed through the semi-industrial section, crossing Rock Run Creek on multiple bridges before reaching Abshire Park (which is an alternative starting point.) The trail surface was mostly asphalt but one section of a mile or so was crushed stone-- fine for bikes but not rollerblades.

The trail was surprisingly pretty, with more curves than a typical rail-trail. At times, it passed close to farm fields and in other places it ran through woods. This section of the trail ended at County Rd 33, about six miles from Goshen.

Another six mile section, running from Middlebury toward Shipshewana, was recently completed. Its official ribbon-cutting ceremony will be held September 20, 2011. When completed in a few years, the trail will run 17 miles connecting Shipshewana, Middlebury and Goshen.

Thanks to Joann and John Smith for writing about the Pumpkinvine trail on their "Now Showing Near You: Wildflowers" blog.
Posted by Chuck Stull at 7:00 AM

Friends of the Pumpkinvine said...

The Pumpkinvine Nature Trail between Middlebury and Shipshewana is now open. There is a 330 foot section just east of the Middlebury DQ where you need to ride or walk on a dirt path through the woods, but that shouldn't hinder anyone from ride this section. Just go slow or walk it.

A spring wildflower hike is scheduled on a short segment of the Pumpkinvine, near CR 33 Sun. April 29. We'll meet at 3 p.m. at Abshire Park on IN SR4, just east of downtown Goshen.