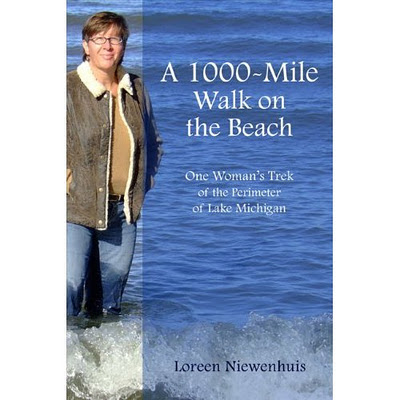 A 1000-Mile Walk on the Beach:
One Woman's Trek of the Perimeter of Lake Michigan
Loreen Niewenhuis
2011

This book tells the story of the author's walk around all of Lake Michigan. She started on Chicago's Navy Pier and walked through Indiana (Gary sounds like the worst part of the journey), Michigan (the most beaches), Wisconsin (not much beach), and Illinois back to Navy Pier. It took 64 days (spread across eight months), 3 pairs of boots, and 1,019 miles. She stayed in bed-and-breakfasts or motels (with a few nights of camping) and had help from relatives and friends for transportation and logistics.

The book is an engaging mix of descriptions of the lake, of her experiences walking, of the people she meets, and of the lake's environmental problems.

Some quotes from her west Michigan segments:

"A little more than an hour's hike north of Grand haven, I entered the P.J. Hoffmaster State Park. This park preserves several miles of shoreline and over 1200 acres of dunes and forest. This park came about through the efforts of P.J. Hoffmaster and E. Genevieve Gillette, who were friends. He was the superintendent of state parks in Michigan in the 1920s and 1930s, and then headed up the DNR for the next two decades. Gillette was the first woman to graduate from Michigan State University's landscape architecture class. Hoffmaster charged Gillette with scouting out areas that would make good parks."

"North of Portage Lake, it soon gets rather remote and the shoreline becomes rugged with high, wooded dunes flanking me to my right, with the expanse of calm lake to my left. There are miles without any signs of civilization, and I pass curious tracks along a small stream that look like a bobcat made them."

"The slim St. Joseph River separates the cities of St. Joseph and Benton Harbor, but they might as well be on different planets. St. Joseph on the south side of the river is a primarily white community, a lovely tourist town with shops and restaurants and kid-friendly Silver Beach. Benton Harbor on the north side is a primarily black community, with a gutted economic base, and a huge crime and drug problem."

While I don't plan to walk around Lake Michigan anytime soon, the day I finished the book, I was inspired to drive to the lakeshore and walk for several hours along the beach.

You can read more on her Lake Trek blog (which includes photos, while the book is straight text) or in this Kalamazoo Gazette article.

Available from Amazon, other booksellers and libraries.
Posted by Chuck Stull at 2:45 PM