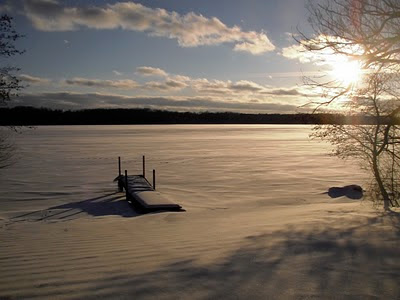 When I went skiing at Prairie View Park I bought a season pass good at all Kalamazoo County Parks. Their website said nearby River Oaks County Park had 4 miles of groomed cross-country ski trails, so I decided to visit. (I went on a really cold afternoon before last week's thaw.)

At River Oaks, I didn't see any evidence of a groomed trail. I didn't even see tracks from previous skiers. I don't know if there had been a policy change, restrictions because of the oil spill, equipment problems, budget cuts, or some other issue. Except for the plowed driveway and parking lot, it was hard to see evidence of any park use.

The snow did show tracks of squirrels, wild turkey, deer, and other wildlife and the views of frozen Morrow Lake were memorable. The unbroken snow was decent for skiing. At the western end of the park, past all the soccer fields, I did find traces of another skier and following those tracks through the woods was much faster than breaking trail. The trail I was on followed the edge of the park property, passing behind Bell's Comstock brewery.

While it wasn't what I'd expected, it still made a nice winter outing. 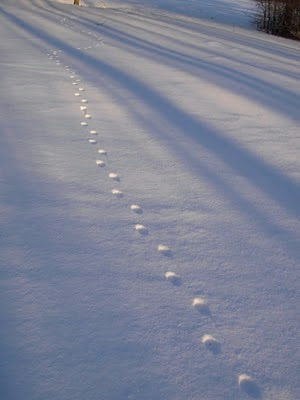 Thanks for the walk outdoors! I appreciate the post. I know it takes time and effort.