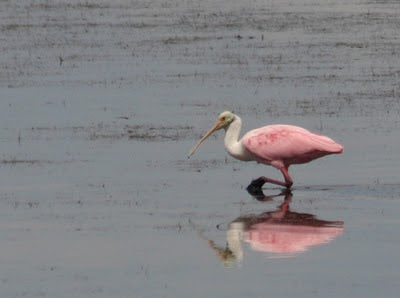 Roseate Spoonbills (Ajaia ajaja) may be one of Florida's most beautiful and most bizarre-looking birds. Their bright pink plumage is strikingly attractive and draws the eye from a distance. At the same time, their bald heads and large spoon-shaped bills appear unnatural. Spoonbills feed by swinging their bills through shallow water. When they feel a small fish, crustacean, or aquatic insect their bill snaps shut.

At the beginning of the twentieth century, Roseate Spoonbills were nearly extirpated in the U.S. by plume hunters, who sold their feathers to the fashion industry. Florida restricted plume hunting in 1891 and 1910, but illegal hunting continued; a New York law outlawing the sale of feathers apparently had a bigger impact. Their population recovered gradually as habitats were protected and other state and federal laws took effect. No longer endangered, they remain sensitive to habitat changes and it remains a "species of special concern". 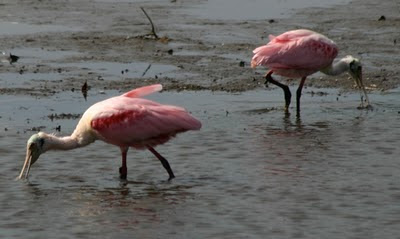 This post is part of a series on Florida's Gulf Coast
Posted by Chuck Stull at 6:59 AM