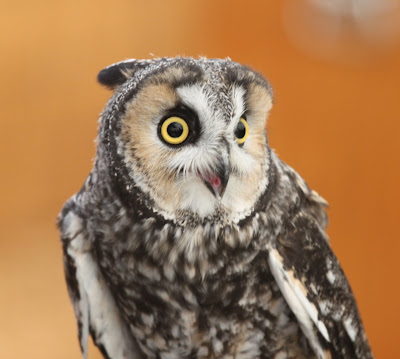 I wasn't familiar with the Long-eared Owl (Asio otus) and I've never seen one on the wild but these owls are native to Michigan, breeding in the north and wintering throughout the state.  They range throughout Canada and the northern United States as well as parts of northern Europe.

Their "ears" are only tufts of feathers while their true ears are hidden by feathers on the sides of their heads.  Like other owls they are a night predator.  They are a medium sized owl, much smaller than a Great Horned Owl but bigger than a Screech Owl. 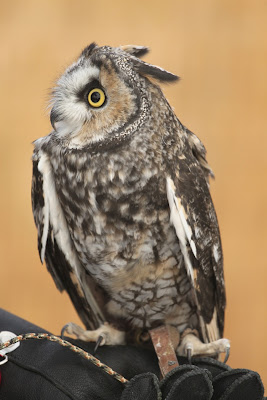 The Long-eared owl is included in John James Audubon's Birds of America.

This bird is used in education programs of the Lake Milton Raptor Center.  They were in Kalamazoo this weekend for an event at Wedel's Garden Center.
Posted by Chuck Stull at 9:23 AM