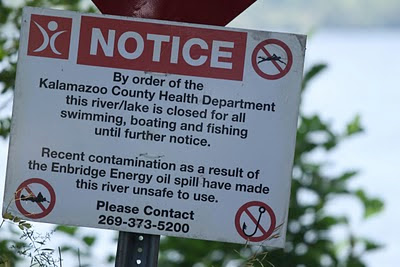 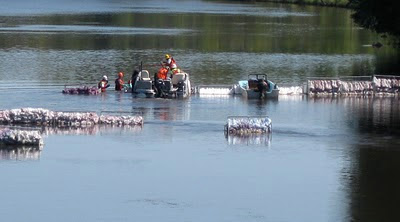 Further downstream, the Kalamazoo River is closed for another clean-up project: the removal of PCB-contaminated sediment.

Email ThisBlogThis!Share to TwitterShare to FacebookShare to Pinterest
Labels: paddling

I grew up in Kalamazoo from the late '60s til I moved out of state in the early '80s. Even when I was growing up, it was common knowledge that the Kalamazoo River was too polluted to be much good for anything recreational -- a forgotten, taken-for-granted minor riverway. I even recall that our jr. high school science class, studying environmentalism and pollution, visited the banks of the river. This was probably early '70s. Where we went was dense with vegetation, marshy -- like something out of an Henri Rousseau jungle painting. Probably plenty of mosquitoes. I still remember watching my foot sink into riverside ooze that was, at the same time, fascinating and icky. I never saw the river again. That's rather sad for someone who grew up there, though I grew up in Portage, near Oakland & the interstate, so there wasn't much reason to go over where the river lies.