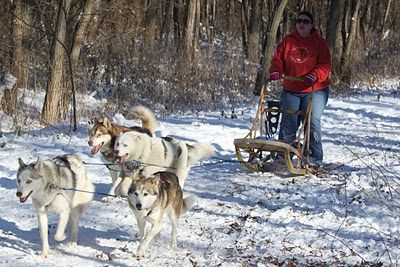 On Saturday, we went to Ft Custer Recreation Area to see the dogsled races. I wasn't sure exactly where they were taking place, so we drove around the empty park for a while before finding the dogsledders in the campground. There were a lot of dog teams there, some harnessed to sleds and some resting in campsites. It felt very northern. Some of the dogs were very tranquil while others would howl when people or dogs walked past. The people were all friendly and one invited us to pet her dogs.

I couldn't figure out how the races worked, since I expected officials to start a group of teams and, later, timers to record the finishes but none of that was in place. Yet it was enjoyable watching the eagerness and the power of the dogs running through the woods. Fresh snow, mild temperatures, and a brilliant blue sky contributed to the pleasant outing.

Later, I read on the dogsled club website that this weekend's races at Ft Custer had been canceled and that a fun run would be held instead. Their other races this season are all a few hours north of Kalamazoo. 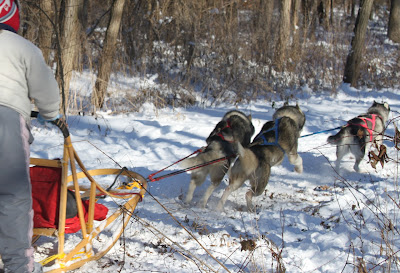 Email ThisBlogThis!Share to TwitterShare to FacebookShare to Pinterest
Labels: Winter