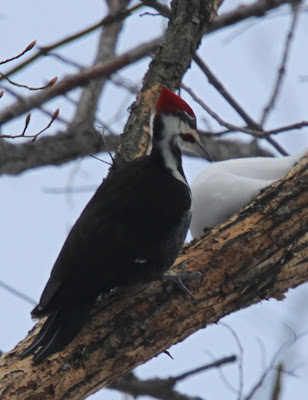 Large chips of bark & wood falling from above alerted us to this Pileated Woodpecker (Dryocopus pileatus) at the Kalamazoo Nature Center last weekend. It was high in a tree directly above the trail & the snow was littered with debris. My daughter caught several pieces as they fell, including one with small, white larva. I'd seen Pileated Woodpeckers in that area on a couple of occasions but this one is the first one to stay in one place long enough for a photo. These are such impressive birds. Another smaller woodpecker, feeding on a nearby branch, was dwarfed by the Pileated.