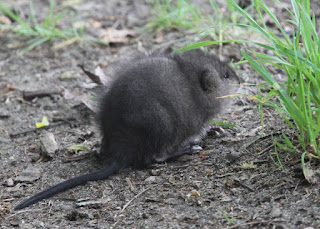 Muskrats (Ondatra zibethicus) in the north have their first litter in late April or early May.  At birth, they are nearly hairless and blind, so they spend their first two weeks in their den.  We saw this one last weekend, so it was probably on one of its first outings.

Muskrats are widely distributed in the United States and Canada and have been introduced in other countries because of the value of their fur. Muskrats aren't really a rat; behaviorally, they are similar to a beaver-- spending most of their time in the water and building lodges and dens.  (Smithsonian says they are also called Muskbeavers, which would be a better name but I've never heard anyone use it.)