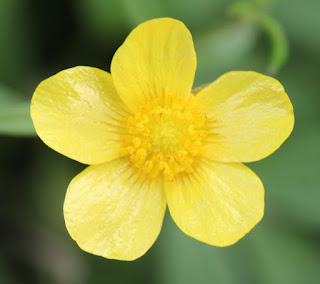 Swamp Buttercups (Ranunculus hispidus) are widely distributed through the central United States and Canada.  Until recently, Swamp Buttercups were considered to be a distinct species, Ranunculus septentrionalis, but they have been reclassified as a variety of Hispid Buttercup.

Apparently buttercups contain a harsh chemical, glycoside, that can cause skin irritation and blisters if you are exposed to the sap and poison livestock.  I've never considered picking or eating them, so no problems.
Posted by Chuck Stull at 7:16 AM