Parklands of the Midwest 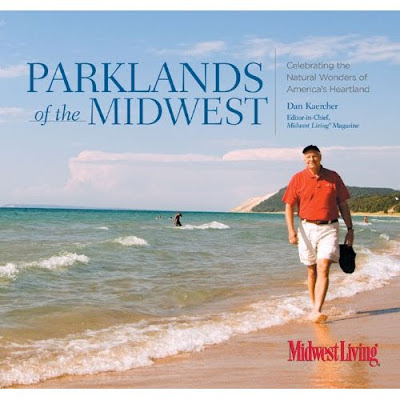 Parklands of the Midwest:
Celebrating the Natural Wonders of America's Heartland
Dan Karcher
2007

This book, by the editor of Midwest Living magazine, is part travel journal, part guidebook, and part picture book. Parks from 12 states (from the Dakotas through Kansas to Ohio) are illustrated with full color photos and a personalized account of the author's visit. The level of detail means only a few parks are featured for each state. A separate section in each chapter suggests restaurants, lodging, and attractions near the parks.


"The star here is a combined total of 65 miles of pristine Lake Michigan beaches and lumpy dunes-- 31 miles along the mainland and 24 miles around those two islands about six miles from shore.

"I'm greeted by Public Information Officer Bruce Huffman and Chief of Natural Resources Steve Yancho. Bruce, about a year into his job here, proves an able and eager guide-- his newbie enthusiasm is contagious. Steve is a friendly and extremely knowledgeable 28-year Sleeping Bear veteran who obviously loves his posting. We head for the nearest beach, at Empire.

"About 11,000 years ago, the last retreating glacier gouged out Lake Michigan. Aeons of slow-motion glacial action had helped from Sleeping Bear's ivory-colored, jumbo-size dunes, soaring up to 400 feet above the lake. Steve explains that the monoliths in the distance actually are called 'perched' dunes-- gravelly glacial rubble topped with sand, like fluffy frosting on a loaf cake."

The Michigan chapter concludes with a section, "More Michigan Parks," that provides more photos and a paragraph or so on each of a dozen other parks:

Other states are covered in a similar manner. Indiana's featured park is the Hoosier National Forest, in southern Indiana, with a nod to the Indiana dunes. The Illinois chapter starts with Starved Rock State Park and then looks in detail at the Shawnee National Forest and its Garden of the Gods.

While the featured parks aren't particularly close to Kalamazoo, many are within a few hours' drive. This book with its engaging pictures and enthusiastic descriptions creates a desire to hit the road.


Available at Amazon, Barnes & Noble, other bookstores and libraries. Iowa Public Television has a companion TV program
Posted by Chuck Stull at 9:30 AM