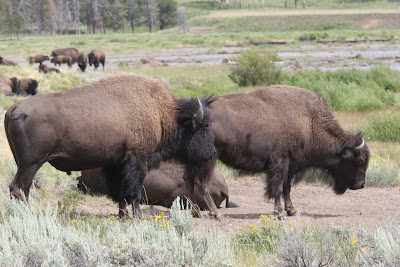 Bison (Bison bison) or American Buffalo were once widespread throughout the United States.  The eastern part of their range extended from northern Florida to New York State and they were found in all the Midwestern and Great Plains states and up into the western provinces of Canada.  At their peak, their population has been estimated at up to 50 million animals.

In the 1800s, the vast western bison herds were rapidly exterminated.  Railroads opened access to the west and international markets provided ready buyers for buffalo hides.  By the beginning of the twentieth century, only 2000 bison survived, included a small wild population in Yellowstone.  In 1905, the American Bison Society (led by William Hornaday and Theodore Roosevelt) campaigned to save the bison and to reintroduce them to the wild.  Bison today are considered a "near threatened" species, with about 20,000 bison in conservation herds and over 400,000 in commercial herds. 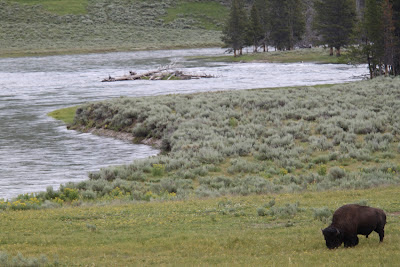 Buffalo are North America's largest land animal, with males weighing more than a ton.  Their large heads and massive shoulder muscles are adaptations that allow bison to plow through deep snow so they can graze through the winter.  Bison move surprisingly quickly-- over 30 mph. 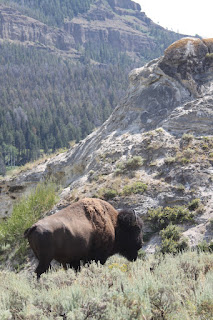 In the late 1980s, an article sparked a controversial proposal to create a Buffalo Commons in the plains.
There is currently a movement in congress to make the bison our "national mammal."

See these online resources about bison.


This post is part of a series on a Road Trip from Kalamazoo to Wyoming and back.
Posted by Chuck Stull at 7:00 AM