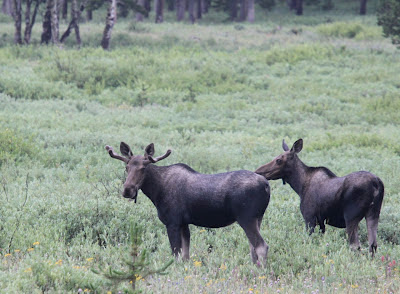 Moose (Alces alces or Alces americanus)  are North America's largest deer.  They are widespread in Canada and are also found across the northern part of the continental United States.  A closely related species (or perhaps the same species) occurs in Europe (where it is called the Eurasian Elk, to further the confusion.)

Male moose have broad palmate antlers which are distinct from other members of the deer family.  Moose antlers are shed each winter and replaced by a larger, more elaborate set the next spring.  The male pictured above is probably a yearling, based on his antler development.  In early August, the antlers were still covered with "velvet" which provides nutrients for antler growth.

While some moose live in Michigan's Upper Peninsula, we saw these in Wyoming.

This post is part of a special Road Trip series.
Posted by Chuck Stull at 7:00 AM